A plane had been chartered by the proprietors of the New Prince’s cinema Stanley Sq. Stalybridge, to deliver a film “What Price Glory” a First World War comedy-drama, to the cinema.

Coming from Woodford Aerodrome to a field on Gorse Hall near Hunters Tower, a well-known local building now demolished.

The plane was due to arrive was 2-15pm but was not sighted until about 3-30pm.
It was the first time a film was to be delivered by aeroplane in the north of England.  A promise by the manager of the cinema (Mr Parker) that the plane would engage in manoeuvres similar to warfare enticed locals to go and watch.
About 20,000 are said to have been there initially, the first plane to be seen by many in Stalybridge/ Dukinfield.

A heavy haze obscured the view, so the machine gradually disappeared from sight. After about a half-hour of waiting, people began to leave until the crowd dwindled to about ten or twelve thousand.

Around 4-10 pm the machine was again sighted, and after flying around a short time came towards the field, circled several times, coming into the field once more, then rose into the air again. A passenger on one of these occasions waved at the crowd who sent up a cheer and threw hats in the air.
Coming round again, the pilot came low into the field, ran along for some distance, too near to bring the machine to a standstill, and accelerated in an attempt to rise again.
Unfortunately, it was unable to do so and crashed, the nose pointing upwards struck the top of the wall, breaking the propeller.

Seeing this coming, people at the end of the field scattered wildly but several young people were injured, and one was killed unable to get away in time. Those injured were either sitting on the wall or by it.
The young boy killed, Jackie Hood age seven, was taken to Hunters Tower.
Six other children were injured, one being Jackie’s sister Edith.

The pilot a Miss Brown and her passenger were only slightly injured.

The Inquiry by the Coroner

An inquiry was held to ascertain whether any steps could be taken to protect the public in this new science of the air, which was in its infancy and may develop on wrong lines unless properly controlled. He went on to say that he was very glad that “a public promise personally received from the New Prince’s Cinema” was that “they would never again arrange a big advertising effort on a Sunday”. Also that the proprietors were deeply grieved at the tragedy.

The Coroner’s verdict
“A MOST UNFORTUNATE AND TERRIBLE ACCIDENT”

MISS BROWN WAS EXONERATED. She was NOT TOLD THERE WAS NO FILM IN THE CAN!!!!!
Milton Parker admitted the plan had always been for the movie to be delivered by road, the old film being too flammable to risk carrying by aircraft.

THE FUNERAL
The funeral for Jackie Hood took place at Cross Leech St church and internment
was at St Paul’s Stalybridge.

The address by the Rev. V. R. Smeed at the funeral of Jackie was scathing.
“We are met today under a cloud of swift and sudden disaster.”
“It was not necessary that little Jackie Hood should die so tragically and suddenly last Sunday afternoon.
It was not the will of God that he should die when and how he did”

He went on to say how such sensational advertising as was witnessed last Sunday “should have been relegated to the weekday.”
Placards “this way to the aeroplane landing ground” attached to the children flocking to the sight left Sunday schools empty, but Jackie however went to Sunday school and arrived after 3pm.

This tragedy was a publicity stunt organised by the manager of the New Prince’s cinema, Milton W. Parker. The job of delivering the new movie was taken up by Walter S. Browning a man according to the Official Notices to members of the Royal Aero Club had only a week earlier been granted his Aviator’s Certificate.
Are Milton and Browning the villains in this story?

Browning, realising he was unable to do the job as the field was too small, had turned back to the Aeroclub.
On arrival, he asked a Miss Brown aged 29, and a more experienced aviator to make the “urgent” delivery of the film.

THIS IS NOT THE END OF THIS SAD STORY
Several years ago I was contacted by someone who lived in the house in Stamford Park who knew nothing of this story or the people who had lived there before.
A young girl living in the house was visited by the ghost of a young boy.  She was not frightened by him at all, and it was given that he was just a part of the house!!!
When she went on to university the ghost appeared there, and again when she moved back locally. Would this be Jackie Hood the kind, thoughtful seven-year-old who lived in the house in Stamford Park, as his father was the gardener there?  Jackie died tragically in the 1928 plane crash on Gorse Hall. 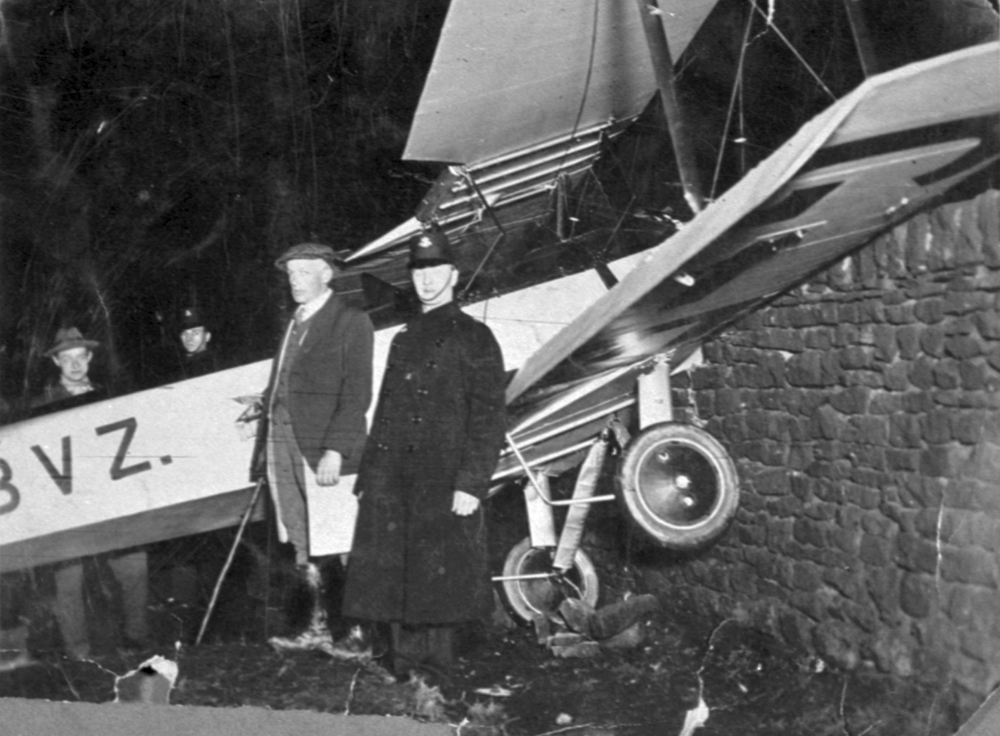