The murder of George Harry Storrs in November 1909 has fascinated, horrified and intrigued people from that date to the present and is one reason why the name “Gorse Hall” has travelled far beyond the boundaries of Stalybridge. The mystery may have started long before the murder itself. One of George’s long time friends was solicitor Robert Innes. In 1897, Innes and his wife Emma decided that a governess should be employed to educate their eldest daughter. Subsequently, a Bavarian governess named Maria Hohl was taken on to live and work at their home, Holm Lea, which was situated near the Stalybridge entrance to Stamford Park.

Mr Storrs being a regular visitor to the Innes House, became quite friendly with Maria and was seen regularly out walking with her in Stamford Park. One evening in early February 1907, Maria walked out of the house never to return. The winter of 1907 was severe and the waters of the canal were frozen over in most places. Three weeks later Maria’s body was taken from the now thawing canal near Knowl Street, Stalybridge, a considerable distance from the house that she had walked out of three weeks earlier. Although no post mortem was carried out on Maria’s body, her actions, previous to her apparent suicide, gave every indication that she could have been pregnant. As the only men she was known to associate with were the minister (priest) who lived in Manchester, Robert Innes and George Harry Storrs, it is suspected that she became pregnant by Mr Storrs. Maria, said to be a devout Lutheran, would have been embarrassed and ashamed enough to take her own life on that cold February evening.

The second part of this intriguing murder starts on the night of September 10th, 1909. At approximately 9-30pm, George Harry Storrs and his wife Maggie were with a friend of Mrs Storrs, Georgina McDonald in the dining room, when suddenly a voice from outside the window shouted, “Hands up or I’ll shoot”. A shot was fired and the window was broken. Storrs, aged 49 years, was a strongly built man and he jumped up and ran to the window where, pointing at him through a hole in the broken glass was a gun. For an instant Storrs and the gunman faced each other in the blackness. Storrs then shouted, “I’m going out after him”. “No Harry, don’t” cried his wife rushing to restrain him, but it was not necessary because by then the man had gone. 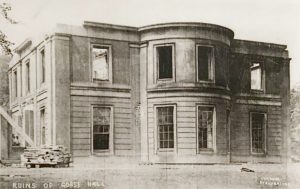 Who was the gunman and what was his motive? Was it an attempted armed burglary or had the man some sort of grudge or a score to settle with George Storrs and lost his nerve at the last moment? George Harry Storrs would have had enemies. He was a tough successful businessman, mill owner and building contractor, the sort of man that was a bit rough and ready. He might have easily been involved in bitter business disputes, but it seems unlikely that this would be the reason for the murder. He was a wealthy man, son of William Storrs who had built the market and the old swimming baths in Stalybridge, the infirmary (now Tameside Hospital on Darnton Road, Ashton), and other fine local buildings. Perhaps that was the reason why the police decided to offer him protection. It was agreed that at least one policeman would patrol the grounds each night, and that a warning bell should be installed on the roof of Gorse Hall to be rung in an emergency. It is said that a few weeks before the dreadful murder, Storrs on his way home, caught a man in the grounds of Gorse Hall, and the man was severely beaten for this intrusion. The police patrolled the grounds every night, that is until the night of November 1st, nearly two months after the shooting. By this time the shock of the attack on September 10th was wearing off.

November 1st 1909 was Election Day, and in the evening every available police officer was needed for crowd control duty in the town. Shortly after 9 o’clock, once again, an intruder crept through the dark grounds towards the isolated mansion. Mr and Mrs Storrs and Marion Lindley, their niece, were chatting in the dining room whilst the cook, Mary Evans prepared supper. The cook was startled to see a man lurking by the kitchen door and, with the light being poor, she at first mistook him for Worrall the coachman. “Oh Worrall” she said “You frightened me but a split second later she realised that she was mistaken. The man was taller with a moustache, thinner and younger than Worrall. To add to her confusion he was pointing a gun at her. “Say a word and I shoot” he said quietly but firmly. Dropping a jug of milk, she ran from the kitchen into the hall screaming. “There’s a man in the house”. Hearing the commotion George Harry Storrs, his wife and niece jumped up and ran towards the kitchen. In the hallway for a second, the two men faced each other silently. A fight started, with Storrs being more than a match for the intruder. During the fight, the intruder for the first time showed his fear when seeing Maggie Storrs with a shillelagh she had taken from its wall mounting in the hallway. He called out “I will not shoot”. Maggie took the gun from the intruder as Harry Storrs called out “Run and ring the bell”. Hearing the bell two police constables, started running up the mile-long driveway to Gorse Hall. Upon entering the kitchen they found George Harry Storrs dying from loss of blood through 15 stab wounds inflicted by the intruder.

George Harry Storrs died shortly after 10 pm. The hunt was on for a murderer. When interviewed by the police later, Marion Lindley and Eliza Cooper thought that the murderer resembled a nephew of Mrs Storrs, a Cornelius Howard whom they had fallen out with a number of years before.
The police consequently issued an arrest warrant for Howard.

The funeral of George Harry Storrs took place on Thursday 11th November. The following day James Worrall the coachman failed to return home from a shopping trip. He was eventually found later that evening hanging from a beam in the hayloft. Cornelius Howard was apprehended on the 17th November trying to break into a shop in Oldham about four miles from Stalybridge. Although when arrested Howard called himself John Ward, the arresting officer, Constable Ernest Schofield thought he looked like the wanted man Howard. He was brought to Dukinfield police station where an identity parade was organised, and three witnesses at Gorse Hall on the night of the murder picked out Howard as the intruder. The police armed with eyewitness identification refused to accept Howard’s alibi that he was in Huddersfield at the time of the murder.

When the trial opened at Chester Assizes, Howard’s barrister, Trevor Lloyd, brought from Huddersfield witnesses to corroborate the alibi. James Davies, the landlord of the “Ring O Bells” public house confirmed that Howard was in fact playing in a domino contest the night of the murder. The jury took 30 minutes to acquit Cornelius Howard of the murder. The police, embarrassed by the verdict, had to start their enquiries all over again. This time they had a lucky break. On the evening of June 10th 1910, a young courting couple were disturbed by a man walking from Gorse Hall to Matley along Early Bank Road. The man attacked the couple injuring the young man with a knife. Luckily the injuries were not serious and the description given to the police turned out to be similar to the man wanted for the Storrs murder. Subsequent enquiries by the police led them to issue an arrest warrant for a Mark Wild. Wild was later arrested, charged with attempted murder of the young man, and sentenced to 2 months in prison. On his release he was re-arrested for the murder of George Harry Storrs. Another identity parade was arranged where Eliza Cooper and Mary Evans picked him out as the intruder at Gorse Hall However Marion Lindley could not be certain that he was the attacker. Wilde gave no credible alibi for the night of November 1st.

Checks found that on the night of the murder he failed to turn up for work. This time the police carried out their investigation more thoroughly leading them to believe they had the killer of George Harry. Wilde was committed for trial at Chester Assizes. A stroke of luck for Wilde was that the barrister Edward Theophilus Nelson who had represented Cornelius Howard at the magistrates’ court had been engaged to represent him. The experienced Mr Nelson successfully argued in court that if the only witnesses to the intrusion at Gorse Hall were convinced that Cornelius Howard was the murderer, then their identification of Wilde as the murderer must be ignored and, if there was any reasonable doubt about Wilde, he must be acquitted. After only 50 minutes the jury agreed with the barrister and Wilde was found not guilty. On his release, Wilde met up with Cornelius Howard for celebratory drinks. Another intriguing twist to the murder came when a rumour spread locally that, around the time of the murder, two foreign gentlemen were seen in Stalybridge and that they had disappeared soon afterwards while the police were searching for Cornelius Howard. Could these have been relatives of the young Maria Hohl who had died so tragically a few years before? Had they come to reap revenge on Mr Storrs?